In the days 7th and 8th of this month took place in Montevideo the First International Event on Experiences about the Ceibal Plan, with the objective of sharing the experience gained during the first years of the implementation in Uruguay of the OLPC initiative, with the name of Plan Ceibal. On the afternoon of the second day, some schools displayed the work they had done with the XOs.

Project Rayuela and LATU were kind enough to invite me to assist, which has been an unforgettable experience for me. The plan was that after the event I would stay for one week discussing with the software team at LATU how they can work most profitably with the Sugar community upstream, will talk about this in a later post.

I still can hardly believe that it has been the second time that I have been close to a child learning with Sugar, and the previous one was more than 2 years ago, when attended FISL in the company of J5 and Jim Gettys. We visited then a school where the Federal University of Rio Grande do Sul was conducting a pilot with very early prototypes of the XO and Sugar.

Visit to the school Luciana de Abreu
This time was very different because we were seeing the results of at least one year of continuous work with Sugar, something that was happening in the mainstream of that society, backed by the government, the families, several volunteer organizations, and the primary education system. 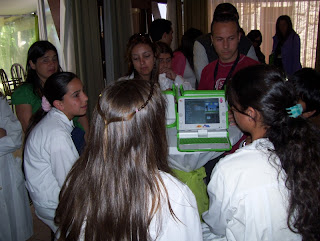 Students displaying their work with Scratch
Though I was ecstatic seeing each school presenting their work, I felt a bit sorry for the developers and non-developers that made that possible with their work but received very little feedback to date on the actual use of it. I have plans to improve that. 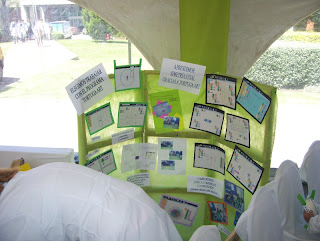 Learning geometry with Turtle Art
It has been a very enlightening and encouraging experience, wish all my colleagues at Sugar Labs could have this opportunity as well in the near future. The last 2 years have been pretty hard for the Sugar developers, always having to stand the never ending stream of naysayers, even from OLPC itself, and with the last year having to live off our savings. I'm very proud that we have managed to stand firm on our believe that the best GUI for learning hadn't been invented yet and that we could contribute something valuable to the mission of giving more learning opportunities to children around the world, specially those from less favoured backgrounds.

After having seen children and teachers involved together in learning with Sugar, I can finally say that we were right. Though of course, this is just starting...

The program of the event can be found here and I expect that soon will appear video recodings of the sessions and of the school presentations. Will post here when they are made public. Also will post soon about the week that followed, in which I had the luck of being a small part of a process in which an organization (and in some sense, a country) moves from being a consumer of FOSS to being a full rights member of the FOSS community.

Thanks to J5 and Gonzalo Odiard for the photographs.
Posted by Tomeu at 7:10 PM