A bunch of GNOME hackers spent the last week hacking on the Python bindings and this post gives an account of the achievements and tries to give credit where is due. 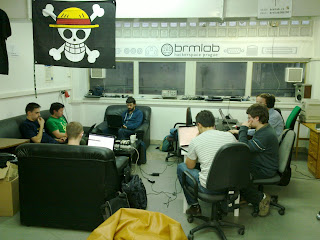 In numbers, at the hackfest were pushed 72 commits to PyGObject, 13 to gobject-introspection and 21 to Gtk+. There was quite a bit of Bugzilla activity as well.

One of the highlights was the push of *lots* of annotations into Gtk+, work submitted by Pavel and reviewed by Johan and some hackfest attendants. This makes a big part of the Gtk+ API accessible through introspection but there will be bugs so testing and corrections are still needed.

Another important contribution has been Martin's work on improving the GVariant and GBus API as exposed by PyGObject. He has a nice blog post explaining his work.

Steve did an amazing job delving into the ugliest innards of PyGObject and fixing some really hard memory leaks. Also, he added several test cases for other reference counting conditions which will help with not breaking it in the future.

Among other things, Laszlo worked on preserving GError information when propagating exceptions to Python and also has been looking at improving considerably our startup speed.

John kept hacking on his rewrite of the invoke path, including all argument validation and marshalling, so we get closer in speed to the static bindings. He gave a presentation explaining his strategy and people in the room seemed to like it. I expect a blog post from him soon on this subject.

Simon (svdlinden) did a lot of bug triaging, code reviews and rationalized our build system, needed after years of regular maintenance hacks.

Sebastian worked mainly on adding overrides, annotations and improving the perl script we provide to make porting easier. This as part of his porting of DVB Daemon to Gtk+ 3.

Nacho kept porting GEdit plugins to introspection and submitted misc. patches as he went, both to core PyGObject and to overrides.

Simon (erikos) started porting some containers in Sugar to Gtk+ 3 with great enthusiasm, but he found that the recent API changes in Gtk+ weren't supported by PyGObject nor gobject-introspection. Several fixes went in and others are still travelling through Bugzilla.

Johan and Colin helped out with reviews and answering our questions about how best to fix things in gobject-introspection, Paolo was there spotting any problems with the code that was being checked in and Mikkel was porting an Ubuntu app and reporting issues.

To finish, I spent most of the time reviewing and discussing approaches with the others but also managed to find some time to do some actual coding myself. Hope to find time during this week to push the last patches through bugzilla and make a new release with all that good stuff.

I'm pretty sure I have forgotten to give credit about something to someone so I apologize in advance and will gladly update this post if I'm told to :)

Thanks to Collabora for sponsoring the hotel, coffee, everynight's beer and the nice duckfest on Thursday at the U Slovanské lípy, check out the photos below:

The GNOME Foundation sponsored the travel and lodging for the participants of the hackfest:

We are also very obliged to the people at the brmlab hackerspace who hosted us during the whole week, they were really great: