Lucian Branescu thinks it would be useful for his Webified project if Browse could run Google Gears.

Browse is unfortunately unable to install and directly use .xpi files, even if it's based on Mozilla. Maybe adding support for this doesn't depend on too much stuff only in Firefox and it could be quite easy. If someone would like to investigate a bit, would be very nice. But for now we can do some dirty tricks to get it up and running.


That would be enough, but unfortunately Gears will be of little use for now until this bug gets fixed in Mozilla, because the security dialog will be too small and you won't be able to authorize web sites to use Gears. Let's hope this gets fixed soon!

And now for the obligatory screenshot: 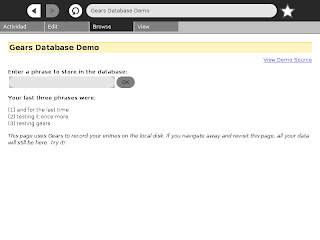 During the Sugar Camp in Paris a couple of weeks ago, Gary C. Martin and me played with ad-hoc networking between OSX and GNOME. It turned out to work flawlessly and we thought that it could be a good substitute for OLPC's mesh network, as Bonjour traffic won't saturate the spectrum if using plain ad-hoc. And it has the great advantages of being able to work on most wifi cards and not requiring any changes to NetworkManager.

So a few hours of hacking brought these results: 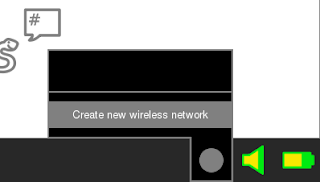 The user called tomeu-soas, running Sugar on a stick on a SD card on a Eee PC, creates new adhoc network. 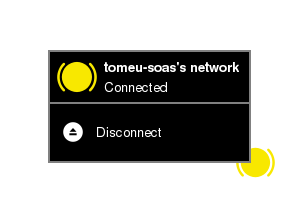 We can see in the neighborhood view that a new network appears, called "tomeu-soas's network". 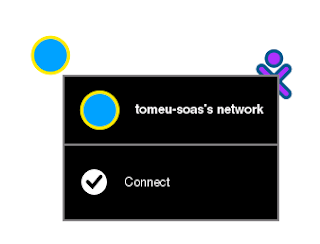 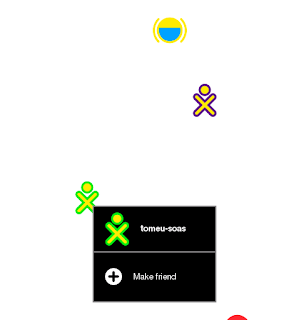 Once we connect to this network, telepathy-salut kicks in and shows the presence of the other people connected to this same ad-hoc network. 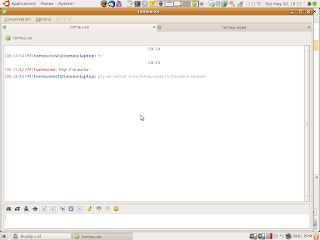 A GNOME desktop can also join the network and interact with Sugar clients if it has Bonjour-enabled clients. In this case it's Pidgin, but any applications that implement some kind of sharing via telepathy-salut will be able to collaborate with Sugar activities that implement the same protocol, like for example Abiword.

And this is how the Chat window looks in the XO.

So I hope that this new feature will make easier for children to collaborate across the network, chat and exchange files without their government having to buy a minimum of 100k XO laptops.

Thanks go to Gary for his brain cells, Dan Williams for some troubleshooting help (and writing the awesomer-than-most-people-say NetworkManager) and to Simon Schampijer who wrote the current NM client code in Sugar in such a way that my patch is really tiny. And also to Collabora for having contributed the code that allows normal bonjour and jabber clients interact with Sugar.
Posted by Tomeu at 6:34 PM 1 comment:

One of the biggest performance problems of Sugar is caused because we use a lot of python modules. This is worst in python than in C or other languages because the bindings for these libraries need to initialize a big bunch of stuff when they are loaded and that takes quite a bit of cpu time and of memory that never gets released.

The visible effects of this are slow startup of activities and occasional system crashes on systems with little memory and no swap as the OLPC's XO.

In the past weeks I have been working on improvements to PyBank so it can run Sugar. PyBank will allow us to use any library based in GObject without having to load a bindings module. I have measured a reduction of memory usage of more than 4MB (from a total of 22MB) for the shell, though I haven't managed yet to run it with all its functionality due to missing pieces in gobject-introspection and PyBank. Each other process that previously used pygtk (almost every base activity) will show a similar reduction in 4-5MB.

I have big hopes for this because we'll get these additional benefits:

- we'll be able to run on systems with less memory,

- we'll be able trade some of the memory savings for compositing some windows so less redraws will happen, leading to a more responsive UI,

- the shell and activities will start much faster,

- by moving the sugar toolkit from python to a GObject library with introspection support, we can completely drop several python modules thus reducing further the footprint. Also activity authors will be able to use the toolkit from languages other than python.

Now, the bad news is that though we have made great advances in this plan, we have only a few months until the next release. My current estimation is that I would need most of that time in order to bring the needed infrastructure to the needed level of maturity, and even then we'll face most probably issues regarding the packaging of the various pieces in all the distros where we want Sugar to be well supported.

So right now my opinion is that we should put this effort to rest for a few months while the base components mature and get packaged for distros and then come back to it after 0.86 is released. Hopefully by 0.88 we'll have a much leaner and faster Sugar leading to more learning for children like this: 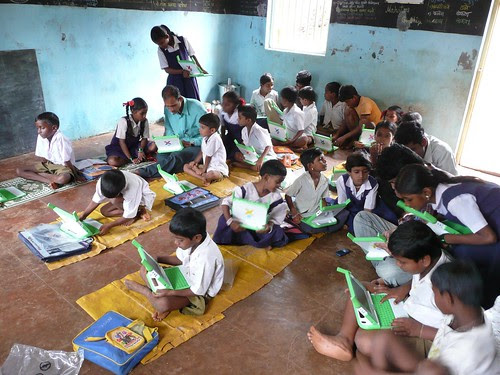 If someone wants to hack further on this, you will need to checkout and install the following modules in sugar-jhbuild:

Johan Dahlin has been of great help during this time, his deep knowledge of pygobject has been invaluable. Also go thanks to Simon Schampijer, Marco Pesenti Gritti and Bernie Innocenti for their moral support. We'll get there, eventually! ;)
Posted by Tomeu at 3:30 PM 2 comments: